We want to capture him, not kill him, the Russians are reported to have said. Their target: Ukraine’s leader.

By Paul Martin.
Russia says its security forces know where Ukraine’s embattled president Volodymyr Zelensky is operating from, but has deliberately not targeted him for assassination.   According to a message conveyed to Israel via diplomatic channels and reported on Israel’s Channel 12, the Russian aim is to capture him alive. The message was part of a secret exchange while Israel tries to mediate an end to the conflict, the channel asserted.

However the Ukrainian leader has said he believes he is the number one target for killing, with his wife and family also on the hit list.

He has not commented on reports that a squad of Chechen mercenaries had been tasked with hunting him down.  A report in The Times says this squad has tried and failed three times, and in one effort, last Saturday, a number of Chechen assassins were ‘eliminated’.

Mercenaries from the Wagner Group, a security company controlled by a key ally of Putin, were also sent to kill Zelensky.

The report claimed Ukraine was  secretly tipped off about the assassination squad’s route by disgruntled or anti-war members of Russia’s Federal Security Service.

A US-led rescue squad is set to fly in from Finland if and when Zelensky calls for himself and his family to be rescued, reports say.  He has publicly refused rescue offers, and very early on in the war famously responded: “I don’t need rescue, I need ammunition.”

Since then though, apart from two defiant videos showing him in the street, his video messages appear to have been recorded underground.

When Zelensky speaks to the UK Parliament, it’s expected he will be guarded by Ukrainian crack troops — as he was at an encounter on March 3.  A photograph shows a soldier wielding a high-powered weapon — but out of sight of the broadcast. 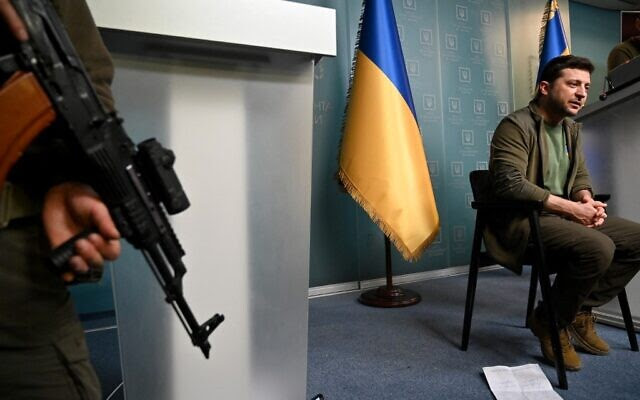 He posted a video of himself in his office.

“I stay in Kyiv. On Bankhova Street. I’m not hiding. And I’m not afraid of anyone,” Zelensky said in the new video, referring to his headquarters, the presidential building in central Kyiv.