My father Desmond Tutu, our family’s strengths and frailties, and, for a country that’s been attacked by human termites, why I still see glimmers of hope.

By Trevor Tutu, the only son and oldest of the four children of Archbishop Desmond Tutu and Leah Tutu., who died in Cape Town aged 90.

As told to Paul Martin.

“I want people to see my father as a human being with human frailties — not just as a saint-like figure.

“He could be explosive.  Sometimes my father would be frightening — especially when he got the feeling that people were being denigrated.

“I can’t blame him for it, but I somehow have inherited the world’s most vicious temper.

“My father himself revealed that his alcohol-fuelled father, my grandfather, had been vicious to his wife, my grandmother.

“I feel deeply grateful that, just as my father had eventually forgiven his father, he also seems to have forgiven me, his son, for my own serious shortcomings.”

“My father once wrote ( in 2014 ): “As a father myself, raising children has sometimes felt like training for a forgiveness marathon…As our own children grew, they found new (and remarkably creative) ways of testing our patience, our resolve and our rules and limits. We learned time and again to turn their transgressions into teaching moments. But mostly we learned to forgive them over and over again, and fold them back into our embrace.

“He did, however, once have to admit to an error of judgement, when he refused to come to my rescue when he had the chance.

“On a Friday night I was arrested by the cops for allegedly drunken driving.

“My father refused to bail me out, as he believed that I needed a short sharp lesson – shades of Thatcherite Home Secretaries – and refused to listen to my increasingly distraught messages from “durance vile”.

“It was the friend of my youth and childhood, Ghaleb Cachalia, who came to fetch me from goal, and paid bail for me.

“When I arrived home on Sunday, and explained that the District Surgeon had declared that I was not drunk, my father was distraught. He gathered all his friends in the legal fraternity — and told them to mount a spirited defence of the charges.

“I probably had more of a dream team of defence lawyers than even OJ Simpson could have dreamt of. When my father thought he had done wrong, his reparation was over the top. I have a suspicion he learnt Latin to be able to say, “Mea culpa, mea culpa ….

“I acknowledge I’ve been a difficult but loving son. But my father never wanted to disown me, 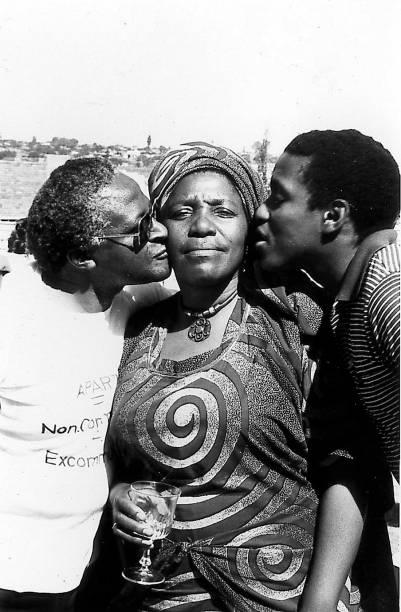 Above: My parents and me. Courtesy of Tutu family.

“As he became more involved in his church and political missions, I was sometimes robbed of his attention.   But he cared for all of us.  And he taught me to care.   In England our family was as poor as a church mouse, but we never felt deprived. He would take us on picnics, to the beach, to sports matches. He made us feel we lived a rich life.

“I learned so much from my father, especially his attitude to others.  He taught me the nobility of people — from the street-sweeper to the shop assistant. `Look into their souls and you will see God,’ he would tell me.

“But what’s brought my father pain like you cannot believe is the corruption here.    He and I shared that pain.

“These are people who are attacking us like termites.  They have ruined everything — like termites burrowing into our bodies.

“What hurt him most was the rulers’ complete inability to understand what South Africa and Africa needs. My father despised not just the corruption but also the ineptitude — the fact that they cannot even run the country.  It’s so obvious: just drive on our potholed roads and experience our cuts in electricity.  These guys are providing proof  to the world that us darkies cannot get things right.

“My father despised [former President Jacob] Zuma’s corruption, ineptitude, and greed intensely.  But he remained with a glimmer of hope that [current president Cyril] Ramaphosa might change things for the better. We’re waiting.

“I can’t see how we’re going to avoid an explosion.  We have 70 percent youth unemployment.   Hello, my friend!”

“Yet at the same time life has got better for the middle-class blacks — like me.

“I can now go where I like, and live an even better life than I had done in England. I spent much of my childhood (aged 6 to 10) and my secondary school and student years (aged 15 to 24) in London, ending up at Imperial College., where I enjoyed student life before returning to South Africa.

“I have been liberated — but go into many South African black townships and you can see that life for most people there is worse than it was under apartheid.  That is the failure of our democracy.”

“You know what’s cheering me up somewhat? The reaction of people from all racial backgrounds and all classes to my father’s death.    A white South African came to the family home, a local guy in his mid-40s,. He knelt down at my feet — in the proper Xhosa tribal style –- and begged me: ‘Please accept my condolences’.

“Since my father died I’ve been out and about chatting to people.  I’ve seen white people in tears outside the Cathedral.  I saw a white guy comforting a black woman, his arms around her shoulders.

“People here are exclaiming joyously.  This is still what my father called us: a Rainbow Nation. We have big possibilities.  South Africans are going to get it right — eventually.

“Last week my son Lizo got into a bar-fight. The young man accidentally rubbed the shoulders of a blonde lady from behind, mistaking her for his actual girlfriend, who also has blonde hair.  Fists were swung — major fisticuffs but no boots in. He’s lived to fight another day.

“I still have friends in London – even among journalists – like Paul Martin and Trevor Phillips.

“Having friends like them shows how beautiful little flowers can come out from the cattle-dung of apartheid. ‘ Flowers from cattle-dung.’  That was, I suppose, my father’s hope and prayer for our troubled land. And it’s mine too.”

SPORT: MY FATHER And ME

“Growing up, my father and I shared a passion: for cricket.  My father was a right-hand batsman who also, unusually, bowled leg spin left-handed.

“On one occasion, my father let me play in a crunch cricket match for the ‘Rest of the World Clergy’ against the English clergy.

“My father and I opened the batting.  I was playing so well, like a kid Ted Dexter with my cover-drives.  Then my father ran me out.  Afterwards, he was too embarrassed to come inside the clubhouse for tea.  And my mum was livid. She warned him that while she might be averse to divorce she had no strong feelings against murder! And she was not joking!

“I first started realising how people should not be judged by outside appearances when, as a young student, I went to watch my favourite football team, West Ham United, play away  against Arsenal in a muddy FA Cup quarter-final.  I had accidentally been standing among Arsenal fans and when we scored, I leaped up and exulted with more hand time than Michael Jordan.  As I landed I realised I was in very hostile territory.

“I was really scared, especially as an Arsenal fan, with huge muscles and tattoos loomed over me and said: “Oi you!’ But he became my saviour.  He insisted on escorting me from the ground as the match finished and protected me till I was on the Tube.  Mind you, he advised me: ‘Never come this way again!’

“West Ham won that match 2-0, and went on to capture the 1975 FA Cup.  It was my most ecstatic sporting moment  — apart from South Africa winning the rugby World Cup in 1995 at Ellis Park, not far from our Soweto home.

“Yes, a love for sport was one thing that bound me and my father together. He was, as they say in cricket, a true all-rounder.”