Playing for high steaks. How two of the world’s greatest golfers got their teeth into the food they really wanted.

As the world of sport resumes its greatest events after the Covid pandemic’s lockdowns, the most prestigious and quirky tournament in the Golfing World is currently underway – seven months later than usual: the US Masters at the Augusta National club in Georgia, USA. In golf, it seems, there’s a lot at steak!

Great golfers have big appetites.  Or so it seems, to judge from the greatest of all, Jack Nicklaus, and from a former World Number One, Greg Norman.

The Golden Bear, as Nicklaus was known because of his hair colour and stocky build, won a world record eighteen Major titles (that is eighteen of the world of golf’s annual top four events). Now 80, Nicklaus struck the first ball at this year’s Covid-delayed US Masters — – albeit only a symbol of the Club’s respect for his achievements and his golfing longevity.

Speaking to a few amused journalists afterwards, Nicklaus lifted the lid off a never-before-revealed piece of golfing trivia about his first visit to Augusta, when the 19-year-old was just getting a setting out on his illustrious the golfing career.

For the duration of the Masters week in 1959 he had shared a cramped apartment called the Crows’ Nest with four other competitors.  The 30-by-40-foot room is an attic above the Champions Locker Room and the kitchen of the Augusta National’s clubhouse, at the top of a steep set of stairs.

To stay there was an honour only offered to the handful of amateur golfers who would be competing in a hugely prestigious tournament against professionals. (As amateurs they would win no prize-money.) 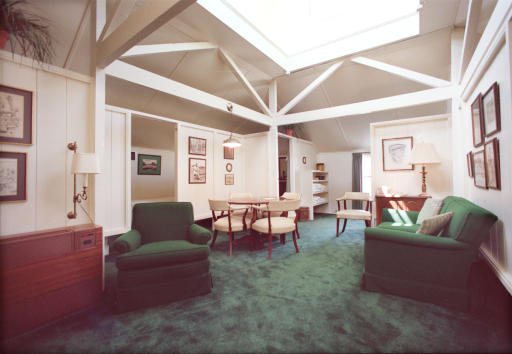 Staying in the Crows Nest had one especially attractive feature: very cheap meals were served to the temporary residents, from the club’s kitchen downstairs.

The amateur golfers were obliged to pay a dollar for lunch and two dollars each for dinner. Nicklaus recalls that, after smashing the ball around for 18 holes each day, he and one of the other four amateurs were ravenous. They ordered and consumed at least two steaks per evening meal – while the other three golfers ate modestly.

The Augusta National complained that the two young men were “abusing” their meal ticket. For Nicklaus and his fellow-big-eater the price, the Club solemnly informed them, would need to be raised: from two dollars to four dollars per dinner.

“I told them that would be quite all right,” said Nicklaus.

Turning professional two years later, Nicklaus went on to win the event six times (only one man, Tiger Woods, also a previous inhabitant of the Crows Nest, has achieved the same feat).

Nicklaus, now aged 80, became by far the biggest-earning international golfer every year for the next decade and beyond — from prize-money, advertising, endorsements, and designing golf-courses.

In July 1987, Norman was trying to defend the British Open title that he had won the year before. (He was ranked the world’s Number One Golfer for a record 330 weeks.)

During the tournament, played at Muirfield, the famous ultra-traditional Scottish seaside links, I was staying by coincidence at the same course-side hotel as him, Greywalls. There, to my delight, the Great White Shark unwittingly provided me with an insight into his eating predilections — and a heart-warming story.

The article I wrote at the time was republished at least once in a book about the world’s top cookery stories. In the Daily Mail it was headlined: “Night school. The secret of a chef who saved Norman from the hunger of nouvelle cuisine. Paul Martin reports on an unknown’s Muirfield feast.”

“Post-script to the Open.  NIGHT SCHOOL.  The secret of a chef who saved Norman from the hunger of nouvelle cuisine.  Paul Martin reports on an unknown’s Muirfield feast.”

This is the tenth tee at Muirfield, four hours after Nick Faldo’s British Open triumph.

The spectators had long gone, and under the dium glare of a car’s headlights the man who surrendered the trophy Greg Norman was giving a nocturnal golf lesson to the man who had cooked his dinner.

Andrew Mitchell is head chef at Greywalls Hotel, which has a garden right alongside the 10th fairway.

The 26-year-old golfing fanatic who plays off a13 handicap dreams up exotic recipes like pheasant baked in souffle while playing his 6 am round before work.

Yet when they first met last week, just before the Open, Greg Norman gave the ched a dressing-down for underfeeding him with ‘fancy’ cooking After devouring half a lobster,an entire Dover sole and vegetables plus dessert, Norman roared: “I’m still hungry. Where’s the nearest fish and chip shop?”

As he and fellow-Australian David Graham were about to drive off in search of food, the distressed chef rushed out and offered to make pasta and chips then and there.

“Golfers don’t go for nouvelle cuisine,” sighed Mitchell, who was trained classically at Edinburgh’s Caledonian Hotel but developed a taste for the modern alternative to French cooking in West  Germany.

But he swallowed his pride to accommodate Norman, who from then on dined on more substantial fare, consuming huge portions of roast pork, beef, duck and lamb, followed by apple strudel and Scottish raspberries.

“I’ve died and gone to heaven,” was Norman’s verdict on the roast port, which gave Mitchell the courage to pop the question:  “Could you perhaps spare five minutes to help correct my swing?”

Little did the excited chef believe, though, that the lesson would take place on the hallowed Muirfield turf, forbidden to all but the chosen few.

The pictures on this page will cause consternation to the ultra-strict Honourable Society of Edinburgh Gentlemen.  Last time professional golfers went on their course without permission was in 1980, hours after the last British Open at Muirfield.

Tom Watson, who had just won the title, had a ‘spoof’ two-hole competition with Ben Crenshawusing old-fashioned hickory-shafted clubs, and dressed in a jacket and ordinary shoes.

The club secretary pounced on the miscvreat, warning Crenshaw: “Never darken my doors again.”  Watson escaped the tongue-lashing by seconds.

Norman says he can ‘handle’ any post-mortem on his illicit golf lesson.  As for Mitchell, he is still ‘shell-shocked’.

Afterwards, the exultant chef took Norman on a tour of his kitchen.  “I told you I wasn’t bad Colin,” he beamed at a fellow-chef.

When Norman packed his bags  they no longer contained that silver trophy he had held for a year.  But he left behind a memory that Mitchell will cherish.

The only person not entirely enthralled was the hotel manageress Henrietta Ferguson. “I shudder to think what would have happened had the secretary caught my chef and Norman on the course,” she said.